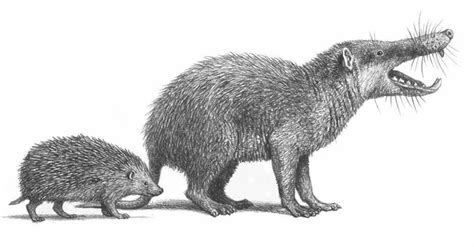 If scientists are reading the fossils right–they do try–Deinogalerix was about five times the size of today’s cute and cuddly hedgehogs (see illustration). It once lived in Italy. It doesn’t anymore. You’re not going to get me to walk into the “X millions of years ago” trap. I have learned not to have much confidence in prehistoric dating schemes.

It’s estimated the giant hedgehog weighed ten pounds and grew to two feet long. I don’t know whether it had the typical hedgehog spines: maybe those haven’t been preserved as fossils, or have yet to be discovered. A spineless hedgehog would be somewhat of a letdown.

We marvel at the many forms of God’s handiwork, and we do wish we could have seen some of these creatures from long ago (however long ago it was). And who says He hasn’t found another place for them?

5 comments on “The Giant Hedgehog”