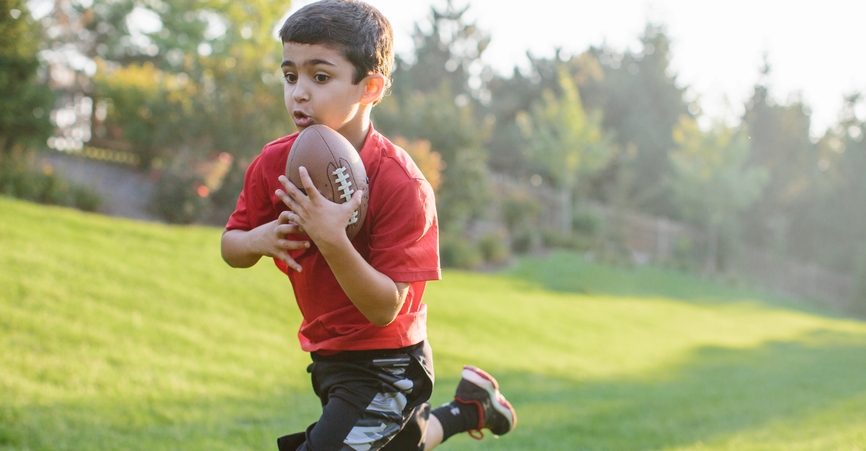 Riding my bike this morning, after a solid week of rain, I saw kids playing football–flag football, organized by adults and under adult supervision.

Ain’t the way we played football.

Yes, we followed the sports seasons; so about now, at this point in the year, the kids in my old neighborhood would be changing over from baseball to football.

Without uniforms, without a scoreboard, without coaches, helmets, parents in the stands, or sponsors. Without having to try to get our names in the sports section of our local paper. Just kids playing football, with only three, four, or five kids to a team. And five was a lot. Three was more likely, and sometimes we played with just two.

We played for as long as we pleased. The best yard for it was Mrs. Thomas’ yard, which had no trees, and she didn’t mind us playing there. The only hazard was her oil tank, up against the back of the house. I remember one time when my friend Ellen caught a pass for a touchdown, but couldn’t stop. Boom! Right into the tank. But kids were tough in those days, and after a few brief moments, she was able to continue.

Sometimes we played tackle, sometimes two-hand touch. We had no goalposts, so field goals were out. We had special rules. “No dumping the hiker,” otherwise hiking the ball to the quarterback would be a thankless job that no one wanted. If we were playing touch, we made a rule that you could lateral to yourself and the touch wouldn’t count if the ball was in the air. We would have loved to try a flying wedge, but there were never enough kids for that. Usually we ruled that the defenders, or defender, would have to count to three or four before charging across the line of scrimmage to grab the quarterback. And we had to be careful of the rose hedge that separated my yard from Mrs. Thomas’.

There was no adult to lay down rules, so we made up our own, kept the ones that worked, and forgot about the ones that didn’t. The games went on for hours and hours, and I don’t remember anyone ever getting hurt, beyond a scrape or a bruise or two.

Playing on our own taught us innovation, cooperation, negotiation and compromise–none of which are to be found in organized sports. I’m afraid it didn’t teach us to be docile citizens awaiting the decisions of authority. My parents only laughed when I mentioned joining the Pop Warner league. “You’d hate it!” said my mother. And I see now she was right.

We played as our parents played when they were kids, and it was golden.

I’ll bet they let you play like that in Heaven.