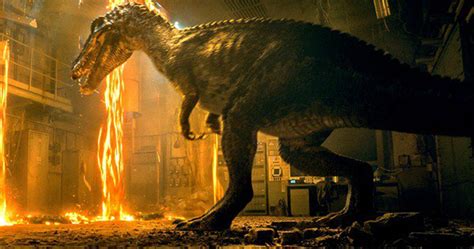 We rented Jurassic World: Fallen Kingdom this weekend, and it was everything we wanted from it. We weren’t looking for Shakespearean soliloquies.

So what we got were dinosaurs, and plenty of ’em, including some nice ones that haven’t been seen in the earlier Jurassic Park movies: a very nice Carnotaurus, and of course a new genetically-engineered man-made not-natural dinosaur that looks like New Jersey’s own Dryptosaurus. Three cheers! Plus the Mosasaur as big as your average township: surfers beware.

As usual, there are bad guys trying to exploit the dinosaurs, good guys trying to stop them, and the dinosaurs get loose and everything goes all pear-shaped, fanabla… I really don’t want to hit you with any spoilers, so suffice it to say that Fallen Kingdom offers a lot of the original Jurassic Park motifs, plus a couple of brand-new ones, at least one of which is just spectacular and you wonder why no one ever did it before. This is a dinosaur chase scene like none you’ve ever seen. Patty wound up dreaming she was being chased by an alligator, and I got kicked a dozen times before I could wake her up.

There are critics who want to put the whole Jurassic Park franchise out to pasture, they’re tired of these dinosaurs, the story line’s always the same, blah-blah. Bunch of spoil-sports. Sure, there are downright silly moments in any Jurassic Park movie–especially JP No. 2, The Lost World, which boasts a virtual dictionary of silly moments–but we don’t watch these movies in search of whatever it is that some of these critics are searching for. We watch ’em for dinosaurs, we get dinosaurs, the bad guys get what’s coming to them, the story line suggests yet another sequel, and we come away satisfied. What’s not to like?