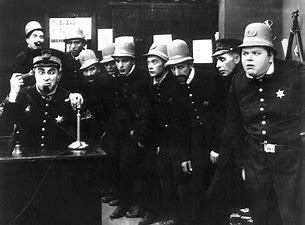 Follow the adventures of Chief Superintendent Wally Bilge as he tries to bring Station House 404 to the cutting edge of contemporary law enforcement!

In the pilot episode, Murder, Schmurder!, Bilge has to pry his detectives away from another stupid murder investigation so they can investigate a 9-year-old boy who called another boy “gay” on the school playground. Meanwhile, four uniformed officers investigate a day care center where, allegedly, a 2-year-old balked at eating spicy foreign food with live crickets in it, thereby raising suspicions that the child might be a racist! And he has to twist veteran Chief Inspector Chumley’s arm to get him to hunt down a man who put a decal of an English flag on his car–“You’ll find the nasty little oyk hates immigrants!” predicts the superintendent.

Hate Squad! specializes in stories “torn from the headlines.” As Chief Wally Bilge so often says, “We can’t prevent murders, robberies, or terrorist incidents. We can’t even bloody solve most of ’em. But one thing we can do is go full-throttle after hate! No one should ever be allowed to say, publish, or think anything–and I do mean anything!–that’s any less than 100% affirming and welcoming.”

I can hardly wait to see Episode 2, We’re Gonna Need a Bigger Jail.

I have lived in Metuchen, NJ, all my life. I have been married to my wife Patricia since 1977. I am a former newspaper editor and reporter. I was also the owner-operator of my own small business for several years. I wrote various novels and short stories published during 1980s and 1990s. I am a long-time student of judo and Japanese swordsmanship (kenjutsu). I also play chess, basketball, and military and sports simulations. END_OF_DOCUMENT_TOKEN_TO_BE_REPLACED
This entry was posted on Tuesday, March 26th, 2019 at 2:33 pm and tagged with British cop shows, everything is racist, hate crimes vs. real crimes, hate speech laws, liberals vs. the human race, police enforce absurd laws, UK "hate" laws and posted in Just for Fun, satire. You can follow any responses to this entry through the RSS 2.0 feed.
« How Deep is the Culture Rot?
Memory Lane: ‘The Mickey Mouse Club’ »