Violet Crepuscular introduces Chapter CCLXXXVII of her epic romance, Oy, Rodney, with a flourish: “Dear reader, you have surely been wondering what Johnno the Merry Minstrel has been doing while Lord Gromleigh and Lady Petunia, who is Lord Jeremy’s aunt, married to the Marquess of Grone, have been visiting Lord Jeremy at Coldsore Hall. If you haven’t, I fear you may be losing the thread of the story.” To say nothing of the thread of that sentence.

Well, Johnno has been busy in Scurveyshire’s Library of Forbidden Books. No one is allowed to go in and see the books–they are, after all, forbidden–but Constable Chumley has been so busy studying moles, he has rather neglected his duty to watch over the library and see that no one enters. In fact, it has been quite a long time since he paid any attention to it at all.

At dinner that evening, Johnno is called upon to perform Lady Petunia’s favorite song, I’ve Got Rabies, singing it while also playing it on his harmonica. This puts everyone into a festive mood except for the marquess, who wanted kippers for supper and didn’t get them.

“Johnno, ol’ hoss, that was great!” exclaims Lord Jeremy’s friend, the American adventurer Willis Twombley, who thinks he is Sargon of Akkad. “How’s about an encore?”

“Sir, I have something better than an encore!” Johnno replies. “I have discovered, through my perusal of certain ancient books whose titles are better left unsaid, the one thing most abhorrent to the spirit of Black Rodney–the one thing guaranteed to keep his evil presence from this house!”

“Lord Jeremy, your troubles are over! Black Rodney will persecute you no more!”

Johnno takes a moment to beam beamingly, then answers.

“Antimacassars, my lord! Black Rodney can’t stand antimacassars! He won’t venture within 50 feet of one. All you have to do is place them on every piece of furniture in Coldsore Hall.”

“My word!” cries Lady Petunia. “But Jeremy–I don’t think you have any antimacassars.”

“That’s no problem, lady!” exults Twombley. “I sure hate them Babylonians, but you got to give the varmints credit for one thing–they make the best goldarn antimacassars in the world! I’m surprised old Queen Victwhatsername ain’t got a passell of ’em in her palace. There’s an English firm right there in London that imports ’em by the bloatload–Dombey & Son. Dirt cheap, too. Germy, old pal, we can order a whole cartful of ’em right away.”

Here Ms. Crepuscular accommodates the reader with a picture of an antimacassar. Three of them, in fact. 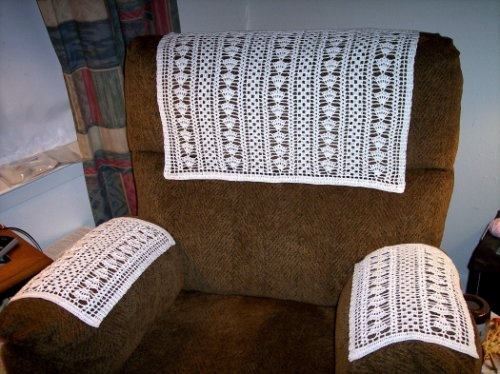 One comment on “The One Thing Black Rodney Hates Most of All (‘Oy, Rodney’)”