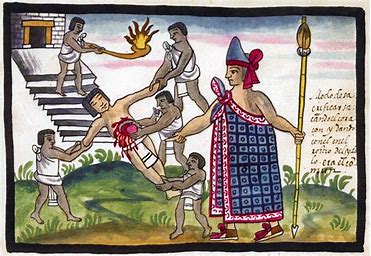 Not exactly a “church,” is it?

Liberals love Islam. Probably because it isn’t Christianity. But this is ridiculous.

So some guy writes an article for a site called Aeon, “Muslims of early America,” which declares that “Muslims came to America more than a century before Protestants, and in great numbers…” (https://aeon.co/essays/muslims-lived-in-america-before-protestantism-even-existed). Oh, please.

You know this writer is a hoser right off the bat, when he discusses Hernando Cortez’ conquest of Mexico in the early 1500s. He resorts to Bernal Diaz del Castillo’s eyewitness account of that enterprise, in which Bernal uses the Spanish word for “mosques” to denote the Aztecs’ heathen temples. The writer expects us to take that literally. Sheesh. What was Bernal supposed to call them? Churches? Cathedrals? The first time Cortez and his men entered the Aztec capital of Tenochtitlan (now Mexico City), Bernal said he and lot of his comrades thought they had literally blundered into Hell itself. An Aztec religious festival was in progress, featuring thousands of human sacrifices–a gory spectacle indeed. No, he was not going to call those temples churches. “Mosques” was the best he could do. Having just finished a centuries-long war with Islam for the possession of Spain, Spaniards like Castillo had a lot of ill feeling toward Islam.

As for scads of Muslims “coming” to America–well, they jolly well didn’t come here on purpose! They were African slaves brought here against their will, some of them with Arabic names. To my mind that does not add up to Islamic colonization of America.

This is all academic bunk. America does not have any “Muslim heritage.” Libs wish it were otherwise, but wishing cannot make it so. Unless you’re writing pseudo-history.

History is the collective memory of the human race, and to taint it and corrupt it on purpose is a kind of crime against the human mind. But it’s only to be expected from academic patzers who prattle on about “your truth and my truth,” etc.

It’s something that our schools and colleges do rather well.