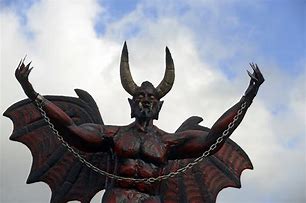 Betcha everyone would get really mad if you opened a public meeting with the words, “Heil, Hitler!” But thanks to an ACLU lawsuit, “Hail, Satan!” is just fine.

Up in Alaska, the Kenai Peninsula Borough Council this week opened a public meeting with an invocation by some jidrool from their local Temple of Satan (https://thehill.com/homenews/state-watch/449660-hail-satan-opening-prayer-at-alaska-government-meeting-prompts-walkouts). In 2016 the ACLU successfully sued the council to allow supposedly anyone to give the invocation.

An unspecified number of people walked out of the meeting rather than listen to a prayer to Satan.

The ACLU… When they’re not suing to keep Jesus Christ’s name out, they’re suing to bring Satan’s name in. What does that tell us about them?

A lot of wise fools think this is all just some kind of game. They’re wrong: it couldn’t be more serious.

Satan is real, and his intention is to destroy the human race.

And assorted liberals are helping him do it.