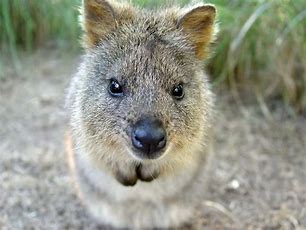 G’day! Byron the Quokka here, with Question No. 5 in my Bell Mountain Trivia contest. Here it is.

I’m trying to talk Lee into offering a bigger prize than just an autographed book. He won’t go for a bicycle; I wonder if I can get him to make the prize an oven. We had an oven once, on Rottnest Island. A very nice family of quokkas lived in it.

I have lived in Metuchen, NJ, all my life. I have been married to my wife Patricia since 1977. I am a former newspaper editor and reporter. I was also the owner-operator of my own small business for several years. I wrote various novels and short stories published during 1980s and 1990s. I am a long-time student of judo and Japanese swordsmanship (kenjutsu). I also play chess, basketball, and military and sports simulations. END_OF_DOCUMENT_TOKEN_TO_BE_REPLACED
This entry was posted on Saturday, July 13th, 2019 at 12:18 pm and tagged with a message to my readers, bell mountain series by lee duigon, Bell Mountain trivia contest, Byron the Quokka, lee duigon blog, reader response and posted in bell mountain series, Just for Fun. You can follow any responses to this entry through the RSS 2.0 feed.
« Third Whopper (You Won’t Believe It)
Quokkas’ Home Movies »

5 responses to “Byron the Quokka: Bell Mountain trivia question No. 5”