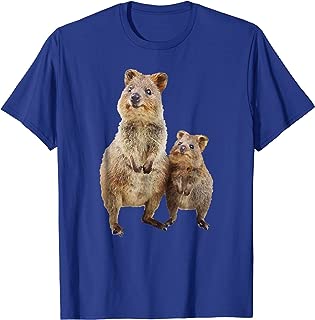 G’day, mates! Byron the Quokka here. And how about that for a prize, eh? A genuine Quokka T-shirt, with me babysitting my cousin Lucie when she was just a little tyke. Which I think was last week.

We have it in Extra-Large (bright red) and Large (quokka blue). If you’re small, you can always use the shirt for a nightie.

All you have to do to win it is post Comment No. 50,000 on this blog. And we’ve just now passed 49,000, so that last thousand comments should go really fast. Crikey–what could be more appealing that a Quokka T-shirt? I told Lee it’d be even better than a bicycle.

Any and all comments are eligible, with the following exceptions: comments abusive of anyone else on this site; comments containing blasphemy or profanity; comments that are really commercials posing as comments (like even a kangaroo couldn’t see through that!), and comments simply too inane to bother with. And whoever you are, you can enter as often as you like.

OK, it’s not quite as good as really being a quokka–but it’s the next best thing.

Who will be the lucky winner?

Excuse me for now, I have to put Lucie back to bed… she gets over-excited by these comment contests.