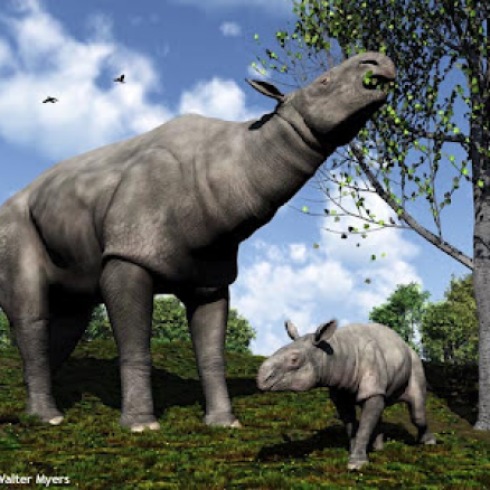 Ah, this beautiful September weather! And the need to get the book finished before the cold weather sets in.

I’ve just finished another five chapters of The Wind From Heaven. Now I’ve got to type them up and send them to Susan for editing. That’s five sets of chapters done, and one more should finish the job.

Somehow the momentum of this story sucked me willy-nilly into a climax before I even suspected I was heading into one. And I suspect there’s another climactic event or two waiting for me in the next chapter set. That wind has been mighty busy, blowing characters all around the map; and there are things happening in places that aren’t on the map.

Inquiring minds want to know why I’ve posted a picture of Baluchitheriums when there aren’t any Baluchitheriums in this book, and haven’t been any since the climax of Book 3, The Thunder King. Well, I like Baluchitheriums–okay? And if another one should march into the story somewhere down the line, well, sometimes a thing like that can’t be avoided.

I have lived in Metuchen, NJ, all my life. I have been married to my wife Patricia since 1977. I am a former newspaper editor and reporter. I was also the owner-operator of my own small business for several years. I wrote various novels and short stories published during 1980s and 1990s. I am a long-time student of judo and Japanese swordsmanship (kenjutsu). I also play chess, basketball, and military and sports simulations. END_OF_DOCUMENT_TOKEN_TO_BE_REPLACED
This entry was posted on Wednesday, September 25th, 2019 at 2:09 pm and tagged with a message to my readers, baluchitherium, bell mountain series by lee duigon, The Art of Writing, the thunder king, The Wind from Heaven and posted in bell mountain series, Book Updates. You can follow any responses to this entry through the RSS 2.0 feed.
« Today’s Worst Idea
Dogs Not Cooperating »