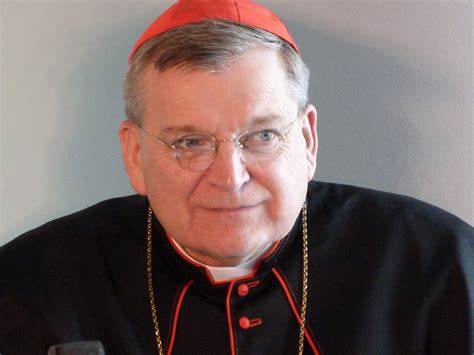 I was about to write that I was just too tired to post any more news today, but then this came along.

Cardinal Raymond Burke, now a member of the Vatican’s highest court, has supported a South Carolina priest who refused communion to presidential wannabe Joe Biden because of Biden’s habitual support for abortion (http://freerepublic.com/focus/f-religion/3808397/posts).

“What the priest did in South Carolina was right and just–would that more priests would act in a similar manner,” the cardinal said. It is, he added, “a question of moral law.”

And the priest, Father Robert Morey, said, “Any public figure who advocates for abortion places himself or herself outside of Church teaching.”

Before they kicked him upstairs to the Vatican, Cardinal Burke made waves here at home by withholding the sacraments from abortion-funding politicians.

Imagine if he were pope!

It’s reviving and refreshing to know that there are still men and women in the Church, any church, who value obedience to God over getting along in a fallen, sinful world.

Cardinal Burke and Father Morey, you have heartened Christians of all denominations.

4 comments on “Three Cheers for the Cardinal and the Priest!”