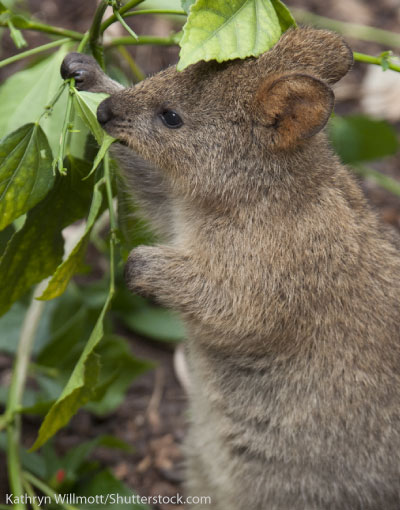 Ipso loquitur mannimota, everybody! Byron the Quokka here, with the latest news about the creation of Quokka University.

We’ve got our Latin motto, we’ve hired a coach for our pick-up sticks team–she insists on remaining incognito, wherever that is–and we’ve appointed half a dozen deans. For that we did “one potato, two potato.” We make a lot of important decisions that way.

This week we wrestled with the question of whether or not we need to set up a cafeteria. We quokkas eat a lot of leaves and bark, grass, fruit and berries, all of which, well, grow here on Rotnest Island so there’s always something to eat, we don’t have to go looking for it. So a faction led by Aunt Feezy said we didn’t need a cafeteria, but every college I ever heard of has one, so we decided we’d better have one, too. Just in case. Two quokkas named Arnie and Asshurbanipal found this nice big cardboard box that we can use. Just bring some food inside and eat it there. It’ll do for starters.

As for degree programs and courses and things like that, we’re still trying to figure out how many humans we can admit as students and what kind of courses they would like. We want to offer stuff they can’t get in human colleges–and how much should we charge them for it? We don’t use money, so how would they pay for their higher education? Who knew it was so much work to set up a college?

We’re also thinking maybe we won’t have courses. Uncle Ripcord says that would be “real cutting-edge, it’ll probably start a trend.” We shall see!

Meanwhile, we want you all to know we’re putting a good twenty minutes a week into this enterprise and that’s why it’s taking shape so fast.

3 comments on “Quokka U.: Coming Along”