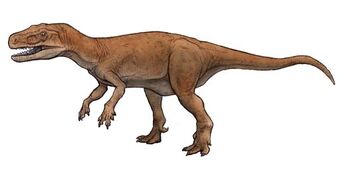 Keeping up with dinosaur discoveries is probably more work than actually making the discoveries.

Back in the Nineties I enjoyed reading about Aliwalia rex, the super-predator of the Triassic Period, already as big as an Allosaurus long before carnivorous dinosaurs had actually sorted themselves out. It lived in South Africa and ate everything.

Imagine my recent disappointment when I learned that Aliwalia rex… is no more. Worse, he never was.

See, they found this great big leg bone, and a jawbone with some sharp teeth in it, and a scattering of other bits and pieces; and acting under the presumption that all these pieces came from the same animal, they cobbled together a super-predator the like of which no one had ever suspected could possibly have lived in the Triassic. Wow! Carnivorous dinosaurs got terrifyingly huge right from the git-go!

Well, they looked again, and now it’s been decided that those pieces don’t belong together, after all: so much for the super-predator. He struts and frets his hour upon the stage and then is heard no more. Except his part got written out of the play before he ever got to play it.

I don’t mean to make fun of paleontologists. Their field of study naturally lends itself to human error. They do the best they can.

But I sometimes think they take too much upon themselves. The Mesozoic Era, the Age of Dinosaurs, scientists have divided into three periods–Triassic, Jurassic, and Cretaceous. These are pretty much arbitrary terms. No dinosaur ever turned to another and said, “Dude, don’t you get tired of living in the Triassic? Why couldn’t we live in the Jurassic?”

The Triassic is fun because nobody’s quite sure what to make of it. The discovery of Triassic pollen was a shock. They repudiated the Triassic bird footprints, so that embarrassment has been dealt with, for now.

But if you can cobble a dinosaur together out of unrelated parts, and call it real, and put it into textbooks–well, how hard can it be to cobble together a Triassic Period? Or even a whole Mesozoic Era? The modern discovery of soft tissue in dinosaur fossils will lead us–where?

Sure, you can find literally hundreds of Centrosaurus fossils, and for that species you don’t have to do much cobbling. But so very many dinosaurs are “known” only from a single bone, a tooth, or a chip of broken bone. It doesn’t stop speculation from running wild. I don’t blame scientists for that. Where’s the fun in paleontology, if you don’t let your imagination loose?