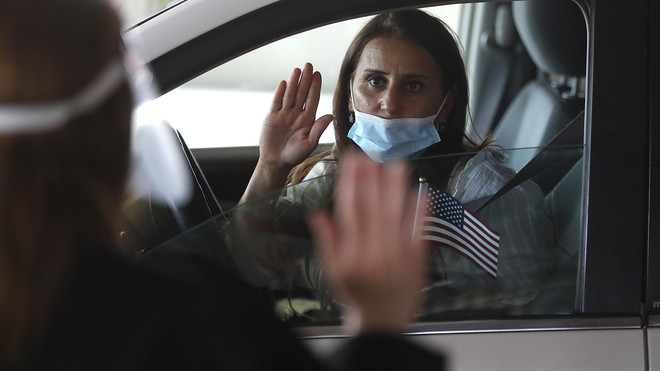 Drive into the parking garage, roll down your window and take the oath, and drive out 30 minutes later as an official U.S. citizen–huh?

At first it sounds like yet another Democrat scheme to stock the voter rolls with persons of uncertain legitimacy; but it’s not as bad as it sounds.

The people receiving their citizenship in their cars are legal immigrants who have gone through all the usual steps of obtaining citizenship. The unusual ceremony–hardly any kind of ceremony at all–has been taken up by the US Citizenship and Immigration Service because they’re in a budget crunch, they’ve already furloughed lots of workers, and if they don’t get another $1.2 billion in emergency funding by Aug. 1, they’ll have to furlough thousands more. People who come here honestly, and who make a commitment to this country, deserve better: but it seems this is the best we can do for the time being.

It’s all that virus stuff, don’t you know. With the pestilence stalking the world, most countries, including ours, aren’t eager to throw open their doors even to lawful immigrants.

But of course Democrats want them coming here illegally, so they can protect them and give them free stuff and count on their eternal political support. They’ll keep the COVID-19 scare going forever, if they can. But that’s another issue.