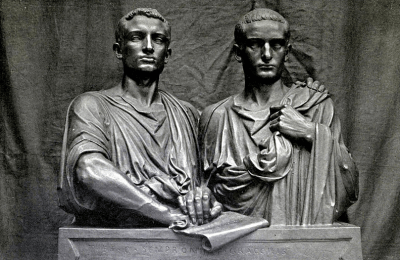 It must never be forgotten, and never accepted, that Democrats employed massive fraud to win the 2020 election, the greatest crime ever committed against the United States. Because of it, we are entering a very dangerous period in our history.

The only right outcome is for the Democrat Party to go out of business. After this, who but a fool or a fanatic would trust them? But their departure will leave a vacuum that, one way or another, must be filled.

Another likely outcome, which to me seems difficult to avoid, would be a split in the Republican Party, populists vs. elitists, with the elitists picking up a major portion of former Democrats. It was this very split that ultimately destroyed the Roman republic. At one point, the plebs were so angry that they deserted the city and refused to come back until the Senate conceded their rights.

But the tension between the two classes remained, and late in the Second Century B.C. boiled over. From 133 to 121 B.C. the Gracchi brothers, radical tribunes, strove against the Senate to reform the state and its economy. The Gracchi went too far, too fast, and the Senate had them assassinated. It was all downhill from there, until Julius Caesar in the First Century B.C. finally put an end to the republic except in name only.

We must not let that happen here.

Even more importantly, we have our prayers, we have a God who is righteous, just, and all-powerful to whom we can pray. We can hope in His mercy and His grace. If it pleases Him to save us, then we will be saved. But as it was our sins, our sloth, and our folly that landed us in all this trouble in the first place, we have some serious repenting to do.

If we want our republic, our freedom, our stability, and our prosperity to continue, we will have to be exceedingly careful for a long time to come.

May God uphold and guide us.