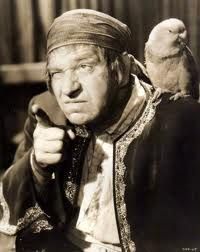 Have I got a scoop for you!

With AG William “Kill the Clock” Barr moving on to greener pastures, our country’s next attorney general, according to a thoroughly unreliable source, will be the famous pirate, Long John Silver–whose motto, ”
Dead men don’t bite,” will usher in a whole new approach to American law.

The fact that Long John is a criminal will never count against him–“He’ll fit right in,” according to the Biden team–and the fact that he is a fictional character will count for even less.

“Fiction, schmiction!” exclaimed a well-known presidential adviser whose name I have forgotten already. “Didn’t you see that last election? The whole business is based on fiction!”

“Long John is a great believer in being smart–‘smart as paint,’ he likes to say,” said another prominent Democrat. “He will never let the Constitution get in the way of being smart. His whole career proves that! He’ll do anything that needs doing, if that’s what it takes to push through our agenda.”

A last-minute deal is being hammered out to make Long John’s parrot the next director of the FBI.

3 comments on “Our Next Attorney General”