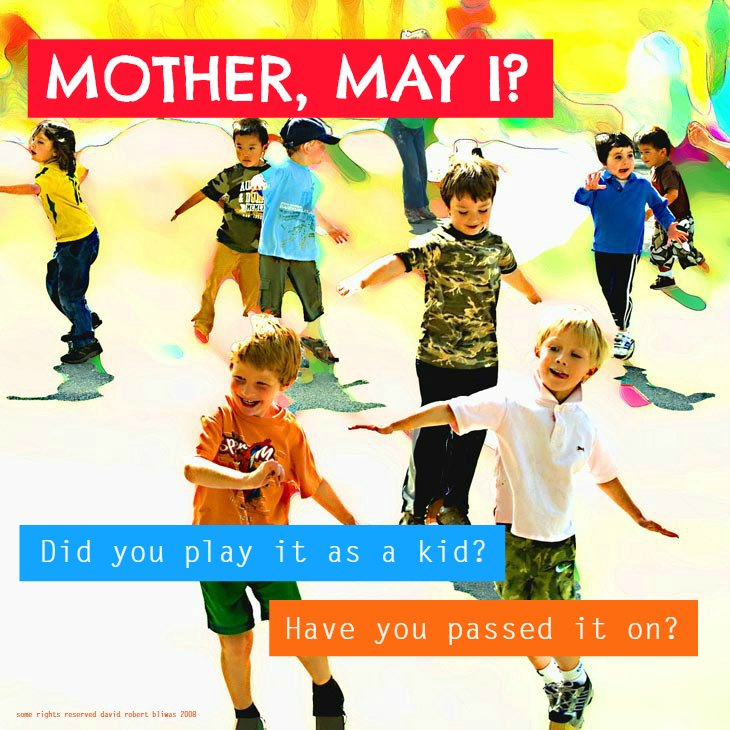 We’ve been talking about games kids used to play. Not video games. No–ancient games, most of which involved running or hiding. Games like Red Light-Green Light, Mother May I?, Hide and Seek, Duck-Duck-Goose, and Huckle-Buckle Beanstalk.

We had a lot of kids in our neighborhood and my mother taught us how to play all these games. She was by far the coolest mom on the block. Although Huckle-Buckle Beanstalk was played mostly at school. Remember? Someone–it can be several kids, or just one or two–goes outside the classroom to wait while “It” hides the box of paper clips. Then the others come back in and try to find it. The object must be hidden in plain sight! And spectators are allowed to shout “warm, you’re getting warmer!” or “colder, colder, freezing cold!”, etc., to help the searchers along.

Mother May I? had the other kids asking “It” questions like, “May I take two baby steps?”, or else “It” would volunteer a command, “Johnny, take one giant step.” There were umbrella steps, scissors steps, spinning steps, crab steps–probably as many local variations to this game as there were localities.

These games were folklore, genuine folklore, handed down from one generation to the next. You wonder how far back in time some of them go. One expects to see a picture by the Limbourg Brothers showing peasant children in the background playing a game we’d recognize as Red Light-Green Light. Only of course they wouldn’t have called it that in the 14th century.

I wonder how much longer we can keep this lore.

Oh, I almost forgot–Statues! Players advance stealthily toward “It,” but have to freeze instantly whenever she turns around. Anyone she catches moving has to go back to the starting line. I really enjoyed Statues.

4 comments on “Memory Lane: The Ancient Games My Mother Taught Me”