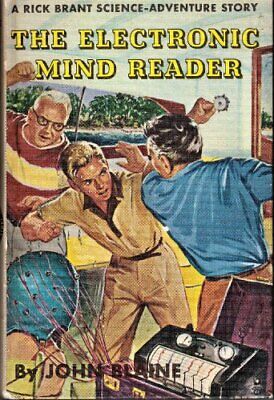 Wouldn’t it be cool if you had a portable weapons system, easily concealed, with which you could scramble the brains of enemy officials? Apparently Russia, and probably China, not only have these weapons, but have been testing them on US diplomats. Victims get something like a brain disease called Havana Syndrome–dizziness, loss of balance, nausea and headaches. Supposedly the damage isn’t permanent. Anybody volunteering to find out?

In 1957 Hal Goodwin (dba John G. Blaine) wrote a Rick Brant adventure, The Electronic Mind Reader–about a portable, easily concealed weapons system that could turn a targeted scientist’s mind into mush. Looks like he hit the bullseye–in 1957! Crikey, what did he know?

The Guardian says 130 US officials seem to have been chosen as targets for these microwave weapons, including an NSC official “in broad daylight in Washington.”

Science has all the answers and is the ultimate authority on truth! Hey, how did that get in there?

Remember, a few years ago, when some TV nooze reporters–and Judge Judy, too!–inexplicably began to talk gibberish? Taken to the hospital, mini-stroke maybe–but nothing. Doctors couldn’t say what made babble come out of their mouths when they tried to speak.

Was someone testing his little microwave weapon?

We live in a fallen world, and there’s always those who are trying their damnedest to make it even worse.

5 comments on “Are They Frying Our Brains?”