Although the rampaging cyclops, having seen the billboards, has fled to parts unknown, the Sea Monkeys ordered by Johnno the Merry Minstrel from that shop in Paraguay have arrived in Scurveyshire. So begins Chapter CDXXXVI of Violet Crepuscular’s epic romance, Oy, Rodney. 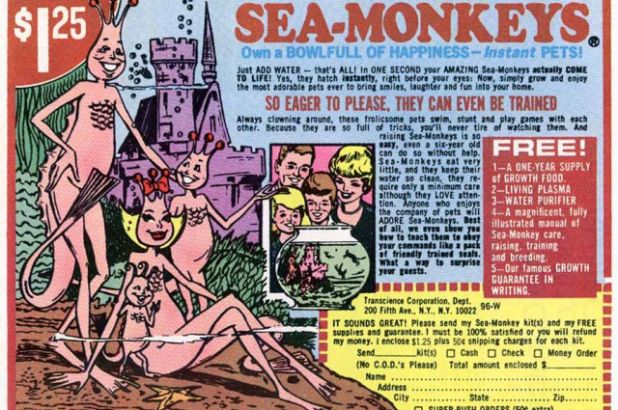 “Because this is a romance set in the Victorian Era,” explains Ms. Crepuscular, “the Sea Monkeys brought in to fight the cyclops look just exactly like the creatures in this advertisement, above. Yes, they can be trained–for war! Only now that the cyclops has fled, there’s nobody for them to fight. This is a problem!”

An army of Sea Monkeys with no one to fight–that’s a problem, all right. Ms. Crepuscular blames it on her readers.

“Now I’m stuck with ten thousand heavily-armed Sea Monkeys, and it’s all your fault!” she complains.

It’s a consolation that a host of ten thousand Sea Monkeys takes up not much more space than a pair of cats. In hopes that the problem will somehow solve itself, Lord Jeremy Coldsore appoints Constable Chumley to command the Sea Monkeys. He assembles them for drill on the town common, in front of the statue of a man who looks like an undernourished chimpanzee. No one knows whom it’s supposed to be.

“Yohn right!” screeches the constable. “A’ fare thee gricken–hoosh!” To his amazed delight, the Sea Monkeys execute these maneuvers flawlessly. He indicates to Lord Jeremy that they’re ready to fight and conquer. How he indicates this is one for the books.

Realizing that the Sea Monkeys could easily become a nuisance to Scurveyshire unless they’re placed on the warpath very soon, Lord Jeremy makes a rash decision to order them to attack the neighboring village of Plaguesby. “With any luck they’ll all get stomped,” he adds.

Imagine his horror when the Sea Monkeys quickly conquer Plaguesby and put it under tribute. They immediately begin agitating for a new campaign.

“Great balls o’ fire!” expostulates Jeremy. “What am I to do now?”

“Only one thing you can do, Germy ol’ hoss,” declares Willis Twombley, who has been watching these developments with undisguised interest. “Send for someone or something that’ll chase away the Sea Monkeys. The Babylonians used really scary squeaky toys for that. We can get some at the pet shop.”

Which brings us to the end of this chapter, with more suspense to come.