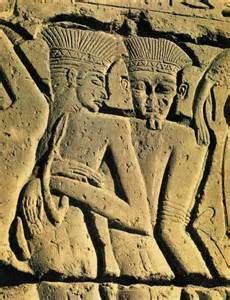 Samson, Saul, David–the Philistines loom large in the lives of these Biblical heroes. They were Israel’s hereditary enemies. And we know from Babylonian inscriptions that Nebuchadnezzar brought the Philistines’ country and history to an end in 604 B.C.

Were they the “Peleset”–one of the “Sea Peoples” who helped destroy Eastern Mediterranean civilization in the 12th century B.C.? Ramses III defeated them in battle and had his temple decorated with their pictures (above). Note the headdresses.

But who were the Philistines? Where did they come from, and what language did they speak? Studies of human remains in an ancient Philistine cemetery at Ashkelon suggests that originally the first Philistines might have come either from continental Europe or from islands in the Aegean Sea.

We have distinctive Philistine pottery, but no Philistine literature. They weren’t big on leaving informative inscriptions for posterity. Most of what we know about them comes from the Bible. The only times the Assyrians and Babylonians mentioned Philistines was when they conquered them.

By David’s time, Hebrews and Philistines had been neighbors long enough to understand each other’s language and occasionally cooperate: King David had loyal Philistines in his army, and once himself served as a mercenary to a lord of the Philistines.

And that’s pretty much that–except for warnings by some of the prophets, notably Isaiah, that judgment day for the Philistines was coming sooner than you’d think.

So much gets lost as three or four thousand years roll by! If it were not for the Bible, the Philistines would probably not be remembered at all, by anyone.

They were mighty once, and they trusted in their strength. But now they’re gone.

10 comments on “Who Were the Philistines?”