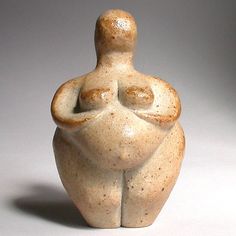 Ah, the Feminist Golden Age! Wouldn’t it be wonderful if Science could prove it once upon a time existed?

Figurines just like the one in the picture above have been found in prehistoric sites all over Southern Europe and the Near East. They have never been found along with writing. That means there’s precious little we can know about them or the people that made them.

That doesn’t stop certain “scientists” from rushing way out on a limb, reconstructing a lost world of “egalitarian agricultural” people ruled over by fat women. Sorry, that’s not science–unless that’s what science has degenerated into, these days. It’s only PC wishful thinking.