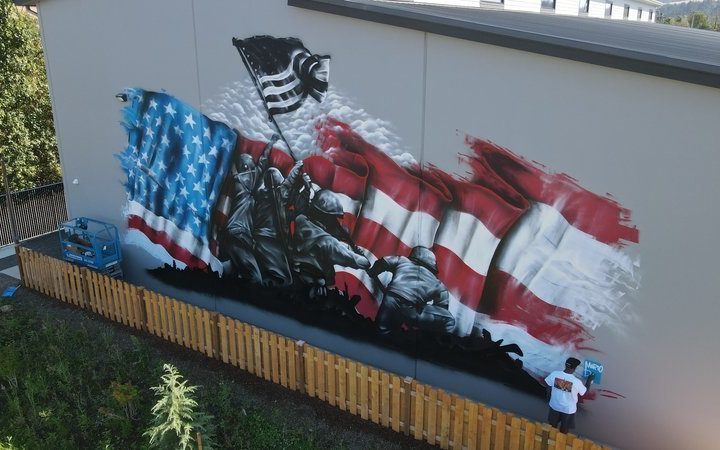 Hmm… It’s perfectly okay to have a colossal portrait of Greta Whatsername scowling down on the streets of America… but totally beyond the pale to memorialize an epic American victory in World War II. Honk if you understand that.

Where does Oregon breed and hatch its politicians?

Acting on the basis of “a single anonymous complaint,” the Far Left crazy who’s the current mayor of Salem has demanded that a mural depicting the flag-raising over Iwo Jima be removed (https://thenationalpulse.com/2022/01/02/far-left-mayor-demands-removal-of-private-iwo-jima-flag-raising-mural/). Somehow it’s always that “anonymous complaint” that gets pieces of America canceled.

The mural is on private property, painted directly onto the wall of a building.

I do not understand the process by which one anonymous complaint can shut down anyone’s freedom, or authorize any local official to levy fines. What could be the basis of such a complaint? Who in Oregon was rooting for the Axis to win World War II?

How in the world do America-hating hoo-dads ever get elected to any public post? Is the electorate crazy, too?

I wonder what would happen to Oregon if the rest of America seceded from it and just left it to stew in its own juices. How long would it be before the whole state went belly-up–or a big chunk of it tried to secede to Idaho?

And then there’s Portland.

7 comments on “Salem Mayor: Down with Iwo Jima Mural!”