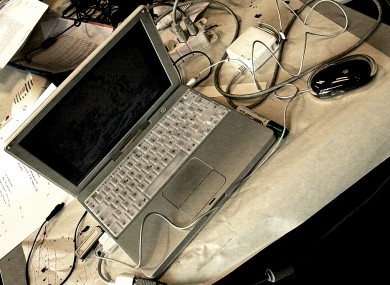 A now infamous laptop owned by Hunter Biden, the, uh, “president’s” son, featuring a veritable circus of corruption–plus lewd photos of Hunter enjoying himself in various unwholesome ways–seems to have gone missing while in FBI custody (https://nypost.com/2022/03/29/gaetz-tries-to-get-hunter-biden-laptop-into-congressional-record/). The laptop was seized by the FBI in 2019 but now the agency’s cyber-chief says he doesn’t know where it is.

As Long John Silver used to say, “Now ain’t that too bad!” Well, heck, we can’t investigate it if we don’t have it, can we?

Congressman Matt Gaetz, however, has read the contents of the laptop into the Congressional Record–which means they’ll have to do something about it. What, who knows? Think the Biden administration will investigate itself?

Copies, copies–you know they’ll argue that the copies can’t be used as evidence because copies can be tampered with. The record of the chain of custody is currently incomplete. (See what you can learn, watching Quincy reruns?)

I can’t decide what’s driving this–bold, in-your-face, criminal arrogance… or outright desperation. The FBI is not supposed to lose evidence. Do they really think we’ll let it go at that? Especially after the 2020 presidential election, in which Big Tech and our so-called “news” media, allied to the Democrats, ruthlessly suppressed all news of Hunter’s laptop? Think that news might have cost them votes?

This is about corrupt politicians and dirty money, big-time. And remember, corrupt dealings involving Ukraine, Russia, and the Biden family all feature in the saga.

Do they get away with it, or what?

Pray for justice. I think it’ll have to come from God.