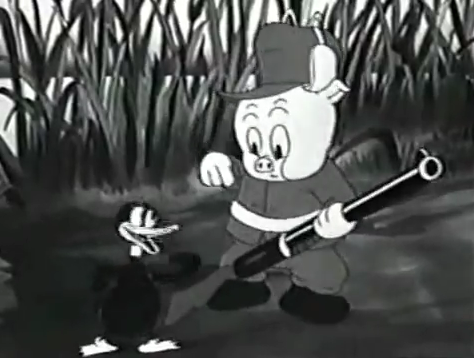 I grew up on Loony Tunes–Porky Pig,. Bugs Bunny, Daffy Duck, and Elmer Fudd. It’s been quite a long time since I watched one of these cartoons. Just on a whim, this weekend, I discovered on the Internet the specific cartoons that introduced three of these characters.

In Porky’s Duck Hunt (1937), Porky Pig goes hunting and winds up trying to bag the prototype of Daffy Duck. Actually, I found this because I wanted to see a sequence of a group of drunken fish singing “Moonlight Bay,” and that turned out to be in this cartoon. It also featured a very wacky black duck.

This character became Daffy Duck in 1938, in Daffy Duck and Egghead. Egghead was the prototype of Elmer Fudd; the bald head and the cwazy voice would come later. This cartoon is an absolute scream, especially when Egghead has to deal with some jidrool in the theater audience.

It wasn’t Elmer Fudd, though, who was the first to hunt Bugs Bunny. It was Porky Pig, in Porky’s Hare Hunt (1937). This toon recycles some of the gags from Porky’s Duck Hunt, but what matters is that herein Bugs Bunny launched his great career. You might find it hard to recognize him in this prototype. If his laugh seems eerily familiar, it’s because a close facsimile of it became Woody Woodpecker’s trademark laugh in 1938. I guess you can’t copyright a laugh.

Great oafs from little acorns grow. I don’t know if Loony Tunes are as popular as they used to  be; but if not, well, they had a good run of several decades, and many of them–including all three of the above–are easy to find on the Internet.

Had we been in charge of the Creation, I’m sure we never would have thought of creating laughter as medicine for the stressed-out soul. But God did think of it, for which we give Him thanks.

Take a break from reading about wacked-out Bruce Jenner’s “courageous transformation” into a grotesque parody of a woman, and relax with a few of these antique cartoons.

They’re even funnier than Brian Williams.

2 comments on “Original Loony Tunes Were a Riot”