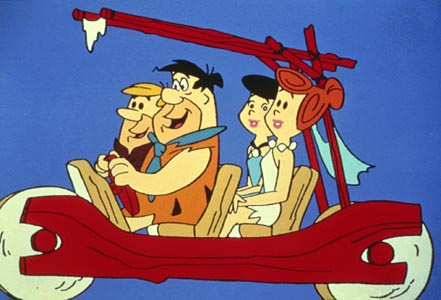 Why are Fred and Barney sitting together in the car? Science has the answer!

Scientists have been breaking their butts and their hearts, trying to find the “gay gene” (“It’s gotta be there! It’s just gotta!”), and just not getting anywhere–despite their perpetual willingness to say or do anything, to get the results they want.

But now they’ve got something almost as good: the archaeological remains of some poor devil who is being billed as the world’s oldest sodomite ( http://www.mnn.com/lifestyle/arts-culture/stories/archaeologists-unearth-5000-year-old-third-gender-caveman ).

Some thousands of years ago, it seems, this guy got buried as a woman instead of a man. Obviously that means he was “gay.” Maybe even a “transvestite” (you get double points if you discover that). It can’t possibly mean he was buried this way to shame or curse him, or as a token of the community’s low esteem. The fact is, nobody knows what it means.

We have a comment, however, from Prof. Stephen “Tiffany” Hormad, chair-being of the Dept. of Gender Studies at Bilgewater University. He is sure he knows exactly what it means.

“It goes to show you that human beings were originally all Gay or Lesbian,” said Dr. Hormad, “and heterosexuality didn’t come along until much, much later in history, as a result of Income Inequality and Global Warming.”

“Happily,” he added, “we are returning to that original condition. And it’s about time, too.”