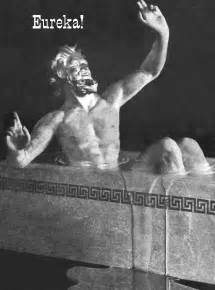 Calloo, callay, oh frabjous day! My Facebook referrals are back.

When Archimedes, in the course of taking his bath, suddenly realized he could calculate an object’s weight (or something) by the amount of water it displaced, he leaped out of the tub and shouted “Eureka!”, which means “Hot dog!”

I can’t quite do that, because I don’t know that anything I’ve tried actually did the trick, bringing back Facebook referrals to this blog after I got mysteriously disconnected from FB last weekend and have gotten hardly any referrals all week long. Maybe some of you folks out there accomplished it by sharing one of our cat videos on Facebook. I don’t know. All I know is, they’re back today, returning as inexplicably as they disappeared.

My father had no object in his house which he didn’t understand. Whatever it was, if it stopped working, he knew how to fix it. And if he didn’t know, his kid brother, Uncle Ferdie, an inventor, would be sure to know. I used to love to watch the two of them take apart the television set and fix it. Dad never had to send it to the shop.

Well, my own apartment is full of gadgets whose workings I couldn’t explain if my life depended on it. And I daresay I’m not alone in that respect.

And so, at least for the time being, my nagging Facebook problem has been solved–how, I just don’t know. But if any of you readers did anything to solve it, you have my thanks. It wasn’t a big problem, but it was certainly a nagging one.