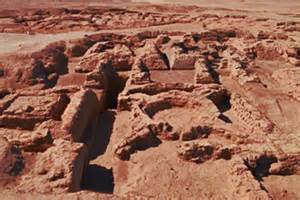 One of the things that fascinates me is the origin of civilization. If it’s wired into us as human beings, why does it seem to have taken so very long to appear in human history? And if it’s not wired in, why did it appear at all?

The Bible makes it clear that civilization started not long after Adam and Eve were expelled from the Garden. God destroyed it in Noah’s Flood, and later scattered it to prevent the completion of the Tower of Babel (Genesis 6, Genesis 11). But if you reject the Bible and turn to what we are pleased to call science, then you’re stuck with no explanation at all.

Alone among the inhabited continents, Australia shows no sign of ever having developed its own indigenous civilization. How could that be? After all, there were people in Australia for thousands of years. Why no civilization? The closest thing to a lost Australian civilization was H.P. Lovecraft’s story, The Shadow Out of Time. And that civilization wasn’t even human!

So imagine my excitement when I read of a lost city discovered by satellite photography and radar at Uluru, a site in the middle of the Australian desert. Wow, this place had everything! Buildings, tombs, artifacts, skeletons–the whole ball of wax.

This takes us back to where we started from, with no native civilization springing up in Australia. Why not?

As yet we have no answer to that question.