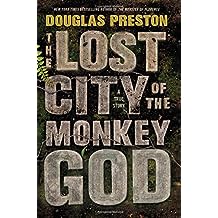 I love archeology, and I enjoyed one of the writer’s earlier books; so I’ve been reading The Lost City of the Monkey God (2017) by Douglas Preston.

In 2015, using the latest technology, scientists finally found a lost city in the heart of the most impenetrable jungle on the planet, in Honduras. People had been looking for this city, and not finding it, for some 500 years. They called it The White City, or The City of the Monkey God.

All of that is very interesting. It isn’t every day we turn up what appears to be a whole civilization that history had forgotten.

Now, the thing is, some of these native American civilizations went out of business before the Europeans came, so their demise can’t easily be blamed on Whitey (although you can be pretty sure our academics will soon get around to trying). The Mayan cities in the rain forest were simply abandoned: it seems the people got tired of the way things were and just walked out. There are still Mayan people today, and because their language has survived, we finally learned how to read the ancient Mayan inscriptions.

But none of those writings mention these very large cities in Honduras. Ah, but the question comes up again–why were these sites abandoned? What happened to the people who build the cities? Why was it all left to be devoured by the jungle?

And here’s where the scientific ninnie-ness comes in.

When the 2015 expedition announced its findings, academics who just sat on their fat kiesters in air-conditioned offices hastened to denounce the reports as hype, or even hoax. Really, there is not even a reasonable doubt that the expedition found the things it said it found. But academics, to paraphrase Deion Sanders, are like a bunch of crabs in a bushel basket: whenever one tries to climb out, the others pull it back down.

Preston himself is guilty of major ninnie-ness.

He thinks, see, that civilizations go bust because of capitalism, which he likens to a “cult” on a par with Scientology. Oh, well, just get rid of capitalism and bob’s your uncle, everything will be just perfect from then on. Says Preston, it’s the capitalist “elites” who crash civilizations. As if it would really make a difference if the elites just changed the color of their jerseys and called themselves socialists! Yo, Doug! You don’t like capitalism, go live in North Korea for a while. You won’t find any elites there (wink-wink, nudge-nudge)!

At the risk of incurring the displeasure of the whoopee crowd, dare I suggest that the main reason these American civilizations collapsed–or were overthrown by Spain–is because their abominable religious practices estranged them from God’s protection.

God hasn’t really let all that many civilizations get wiped out for good. He may destroy their empires and turn them into has-been nations, but usually something survives.

The native religion of the American civilizations revolved around the worship of gods who were no gods and the practice of human sacrifice on a massive scale. Should God have protected this? It seems He chose not to.

And before you scream at me for being an apologist for Spanish imperialism–well, that empire isn’t around anymore, is it? Could it have been accused of governing itself and its possessions according to God’s commandments? According to Jesus Christ’s teaching and example? Not a bit. So no more Spain as a great power in the world.

We live and thrive, all of us, Christian and non-Christian alike, at God’s pleasure. When He turns His face from us, we are troubled.

God will judge the whole earth, every nation, every tribe. And, as Abraham declared, shall not the judge of all the earth do right?

He will. He has and He will.