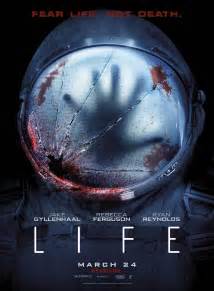 Hey, we saw a cool science fiction movie yesterday, a nice and scary one–Life, which we rented from amazon.

The ideology of unbelief dictates that life be found on other planets. Somehow that’s supposed to prove there is no God. You’d have to ask them how that works. Although I wouldn’t bother.

But if there were… this movie shows you what might happen.

Actually, messing around with alien organisms seems like it would be a very bad idea. Somebody on that space station should’ve read The Andromeda Strain. But they do screw around with it, they just can’t help themselves, they give it a cutesy-poo nickname–and of course it winds up loose, and sets about killing everybody there. It’s sort of a half-octopus, half-starfish that gets bigger and bigger and smarter and smarter with every victim it devours.

And everything goes wrong. They should’ve watched Jurassic Park before they left earth. All these carefully thought-out protocols and procedures, all the bright ideas of scientific whiz kids–well, the Martian monster doesn’t know and certainly doesn’t care about any of that.

I really didn’t notice who was in the cast. All the characters were too busy trying to stay alive, and had no time to devote to personal issues. I can say the film was well-acted, well-directed, fast-paced, and with a straightforward cinematography that didn’t make my wife seasick, watching it. A very effective study in suspense punctuated by frantic action.

Again and again the movies we make tell us that our science isn’t all it’s cracked up to be, and warn us to proceed with caution. On some level, we know this!

And yet we never listen. It’s not Martian monsters that devour us, but bright ideas and clever societal innovations dreamed up by blockheads hailed as sages.