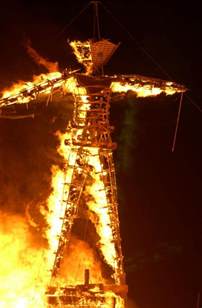 It’s time again for the annual “Burning Man” festival of “radical inclusion,” whatever that is, out in Nevada’s Black Rock Desert; and this year organizers are expecting to draw at least 70,000 paying participants (http://www.sfgate.com/burningman/article/celebrities-and-tech-execs-going-to-burning-man-11742825.php), including celebrities and hi-tech corporate movers and shakers.

The highlight of the festival is the burning of a wooden human effigy. Anybody ever see The Wicker Man? Same thing, except in the movie they burn it with a live person and live animals inside it, as a sacrifice to pagan false gods. Julius Caesar had a major beef with the Gauls over this, and devoted a lot of work to stamping out this evil practice.

Would you believe The Burning Man got its start in San Francisco? Okay, I hear you saying “Where else?”

This year some of the hippier types are complaining that capitalism is “ruining Burning Man’s original spirit.” Maybe capitalism is one of those things you exclude when you’re doing radical inclusion.

I’d like to know how many liberal churchmen attend this jamboree. You know–the kind in pink or lavender shirts who perform same-sex pseudomarriages.

Anyhow, that’s the state of our culture. Burning Man is no big thing in itself, but all those little things add up into a burden that will one day crush us.

Because when you kill the culture, the culture’s gonna kill you back.