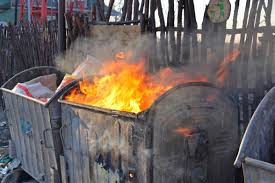 Dumpsterfire Inc., the multinational entertainment giant, has filed for bankruptcy.

We can’t help thinking the decline and fall was due to some really bad decisions as to which new products ought to be pushed. Among the biggest money-losers were these.

Whispering Wally, a TV series about a big-city police detective afflicted with a terrible stammer which he conceals by whispering. The fact that the dialogue was virtually inaudible doomed the show to failure.

Lesbian Cookies. Don’t even ask, because you don’t really want to know.

The Cockroach Kids, a computer-generated animated feature film, with aspirations to morph into a series of children’s picture books, was unable to deliver on its much-ballyhooed promise of “multiculturalism for tots.” One movie reviewer confessed that he had to run out to the lobby every time the Cockroach Kids chowed down on spoiled cat food.

We Don’t Need No Stinkin’ Morality was a reality TV show aimed at “out-Springering Jerry Springer” in celebrating genuinely depraved people–many of whom were arrested on their way out of the studio.

Spot the Racist! Intended as a role-playing game for use in middle school classrooms, it never seemed to do anything but start fights and then lawsuits.

Milo Musch, CEO of Dumpsterfire, is still perplexed by his company’s nosedive.

“All the cultural trends were with us–we couldn’t miss!” he laments. “I guess it just goes to show you that there are still too many normal people running around loose. And I expect we’ll go down in history as being at least five years ahead of our time.”