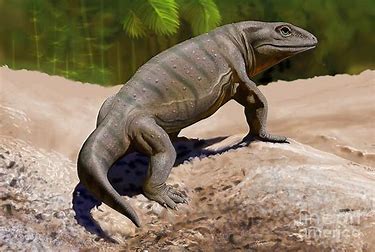 This little character doesn’t get much ink nowadays, having been upstaged by his more spectacular contemporaries. But back when I was first getting hooked on prehistoric critters as a boy, “Seymouria” was in all the books.

Not everything that comes from Texas is big. Seymouria was only two feet long or so. Its fossils have also been found in Europe. The odd thing about Seymouria was that he seems to have been an amphibian that was able to prosper in a dry climate because some of his features were more like a reptile’s than an amphibian’s. No fossils of its young have been found. I discount reports that Seymouria tadpoles resembled beautiful women.

The Creator is very creative. Seymouria may not look like much, but it was really a very innovative design.

I wonder if it’ll turn up in Obann. It might make a nice pet for somebody.