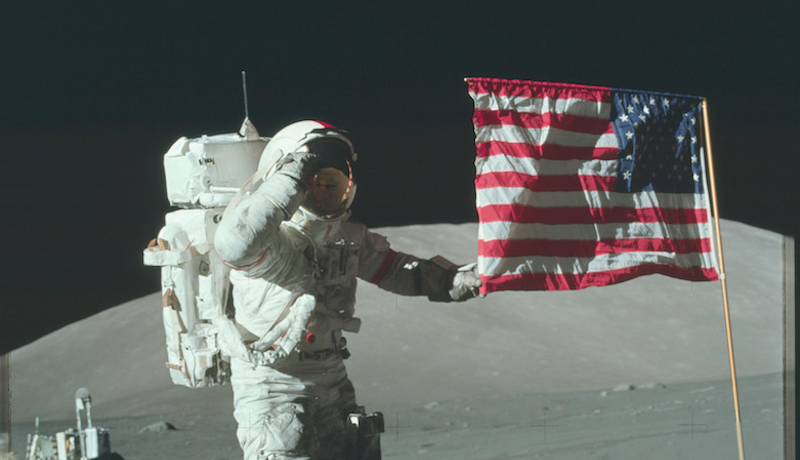 Actors are such drips. But they only parrot what they hear from others. In fact, that’s their job–speaking lines written by others.

The First Man, Universal Pictures’ dramatization of the 1969 moon landing (slated for release October 12)… leaves out the historical fact–and arguably the centerpiece of the drama–of astronauts Neil Armstrong and Buzz Aldrin planting the American flag on the surface of the moon (http://www.foxnews.com/entertainment/2018/08/31/first-man-leaves-out-american-flag-in-moon-landing-scene-ryan-gosling-defends-decision.html).

Because, says the Canadian actor who plays Armstrong in the movie, the moon landing “transcended countries and borders.” He said this at the Venice Film Festival, where the movie was trotted out for a foreign audience.

Goldarn countries and borders! When are we gonna get rid of them and have a nice, cozy, global government?

So who put the first man on the moon? Italy? Saudi Arabia? Peru?

The answer is “the United States of America,” with American technology and know-how, paid for by the American people with their taxes. It was not a “We Are the World” moment. It was an American moment. We did it. That the rest of the world benefited by it, and might have even rejoiced in it, is beside the point. We did it, world: not you. And to this day no other country has matched this achievement.

We didn’t claim the moon as U.S. territory; but Congress declared “this was a United States project.” As if that even needed to be said in 1969.

But it does need to be said now, in 2018, as the international community seeks to hijack one of America’s signature achievements.

I saw our flag planted on the moon, on live TV. So did millions of other people. And we remember, in spite of the Open Borders crowd trying to infect us with amnesia.

And they can take their unhistorical movie and stick it.