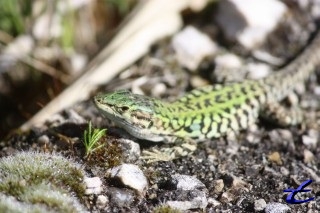 See? Toldja. As soon as the comment contest is over, the comments dry up.

Ah! But I hear you ask–well, I imagine that I hear you ask–“What’s he doin’ with that lizard?” Not much. It’s Sunday, and I would rather not write about any of the nooze today. And I like lizards.

That little guy up there is a European wall lizard, or lacerta. We used to have a pair of those. They were the first lizards we ever had that mated and laid eggs. Unfortunately, we were never aware of the eggs until it was too late to move them to a friendlier substrate, and they were all dried out. I would have loved to see the hatchlings: they would’ve been like living jewels.

The male escaped, somehow, and was gone for six months. Then he turned up again, fat and sassy, like nothing had happened. I put him back with his mate. She used to treat me to a threat display before accepting food from my fingers. They pretty much thrived on Mighty Dog, but live insects were always welcome.

See? No news! Piece of cake.