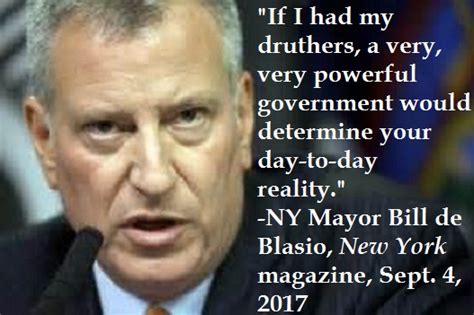 This is what you voted for???

In his annual State of the City speech this weekend, New York City Mayor Warren Wilhelm Jr., dba “Bill de Blasio,” said New York’s wealth is “in the wrong hands” and vowed to redistribute it (https://www.nytimes.com/2019/01/10/nyregion/bill-de-blasio-state-of-city.html). Once a Sandinista, always a Sandinista.

Yessirreebob, said the man with two names: “There’s plenty of wealth in this city. It’s just in the wrong hands.” I know this sounds like a satire, but it’s not.

The mayor proposed to require paid vacations for “most” private-sector employees–if you really need an explanation of why that’s such a bad idea, shame on you–and to “seize buildings” from “scofflaw landlords.” Always so much better to have them in the hands of scofflaw politicians.

When Themistocles was elected General of Athens, Aristides dropped him a subtle hint: “The really excellent thing in a general, Themistocles, is to keep the money from sticking to his fingers.”

How many public officials in de Blasio’s New York can follow that advice? Mr. Wilhelm’s speech contained no mention of the corruption that has been endemic in his administration.

Once upon a time America had too much self-respect even to consider adopting the follies and the sins of socialism.

But now we don’t.

7 comments on “New York Mayor: Wealth ‘Is in the Wrong Hands’”