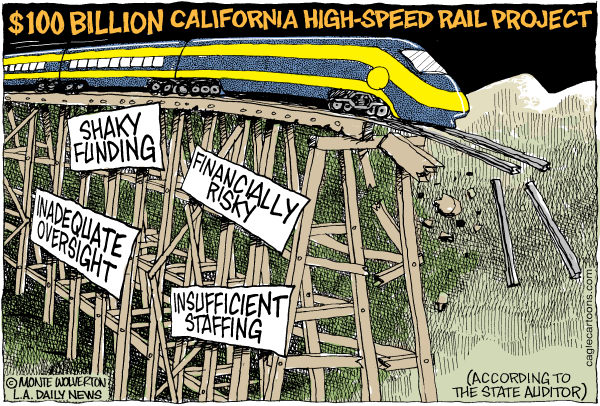 The little engine that couldn’t

California Gov. Gavin Newsom has canceled his state’s infamous “high-speed rail” project, saying it would cost too much (ya think?) and take too long (https://www.breitbart.com/politics/2019/02/12/california-governor-gavin-newsom-cancels-high-speed-rail-would-cost-too-much-and-take-too-long/).

In 2008 this pipe dream was born, and nursed by then-governor Jerry Brown, as the answer to California’s perceived overuse of the car. The original estimated cost of creating a “bullet train” linking San Francisco and Los Angeles: $37 billion.

By now they’ve already spent $5 billion, with nothing to show for it, the estimated cost has swollen to $77 billion–maybe as high as $100 billion, some say–and could not be finished earlier than 2033.

California also ran into a problem when a lot of the people in really expensive neighborhoods, who initially voted for the project, discovered the train would run through their own vicinity. So they changed their minds about it in a hurry, and opposed it. This phenomenon has its own acronym, NIMBY–“Not In My Back Yard.” Somehow their own cherished Green New Deal project totally lost its appeal for them.

The $5 billion is spent and gone. It cannot and will not be recovered.

Big Government–it trashes everything it touches.