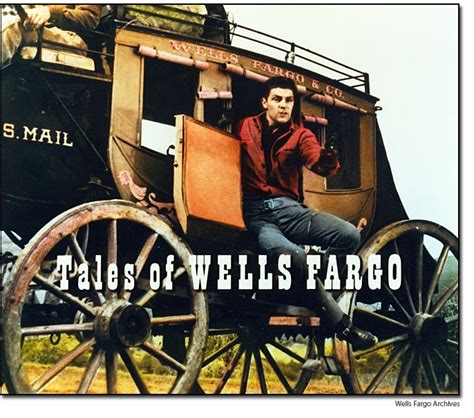 I had to go to Wells Fargo today to do yet more paperwork for Aunt Joan’s very small estate. As I sat there at the banker’s desk, and he ran stuff through his computer, I got to thinking about one of the many TV westerns that I used to watch when I was a kid–including Tales of Wells Fargo, starring Dale Robertson as a Wells Fargo agent who went around having all sorts of adventures and foiling the bad guys. It ran from 1957 through 1962, complete with comic books and bubblegum cards.

I don’t know what I would’ve thought, back then, if I’d found out Wells Fargo is just a bank–a bank!–like any other bank: the last place in the world you’d go to, if you were looking for really colorful adventures. Oh, the crushing disappointment! It’d be like finding out that Tarzan was a greeter at Walmart. Or that Bat Masterson was a sportswriter for a newspaper. (Uh, dude–Bat really was a sportswriter… fap…)

It was all a lot more interesting, the way it was shown on TV.