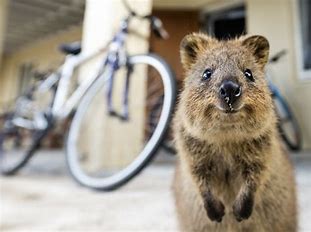 Byron the Quokka is concerned that the comments aren’t coming in as fast as he anticipated. So he has decided to up the ante.

Now the prize will be that wonderful bicycle you see in the picture behind him. I don’t know how a quokka goes about obtaining a bicycle. I don’t see how Byron’s feet can reach the pedals.

But whoever posts Comment No. 44,000 will win either an autographed copy of my new book, The Temptation, or that really nifty bike that somehow fell into Byron the Quokka’s opportunistic little paws. “The wheels actually turn!” he claims. We currently have 43,539 comments, so that leaves a mere 461 to go.

So come on, out there–think of something witty, pithy, or unforgettable to say and post it as a comment!

Just hurry up and do it before whoever that bike really belongs to shows up and takes it away.

I think there’s a future, though–don’t you?–in offering other people’s property as prizes in my contests. There’s gotta be a political theory that goes along with that…