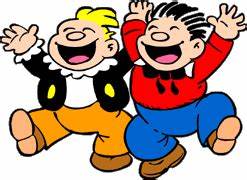 The Katzenjammer Kids, at the hands of various artists and writers, were in newspapers and comic books for 109 years, starting in 1897, until 2006; and they’re still available in reprints.

They were in the Sunday color comics in my Grammy’s paper (but not ours), and I always looked forward to seeing what Hans and Fritz would get up to next. Looking back on it now, I wonder why they were so popular. Really, they weren’t nice at all–in fact, a couple of delinquents. Did they resonate with our sin nature, with some darkness in our souls? I can’t imagine trying to baby-sit for them: you might not live to tell about it.

Then again, perhaps they served a useful purpose, after all–an opportunity to let off steam without doing any harm. Hey, I watch the Three Stooges. That doesn’t mean I go around poking people in the eye and pulling chandeliers down from anybody’s ceiling. It means I laugh when they do it, because it’s so ridiculous. Maybe not as ridiculous as Okashii-yo-Cortez, but certainly more harmless.

I don’t know what I’d give to be at Grammy’s house again, reading the comics in her Sunday paper.