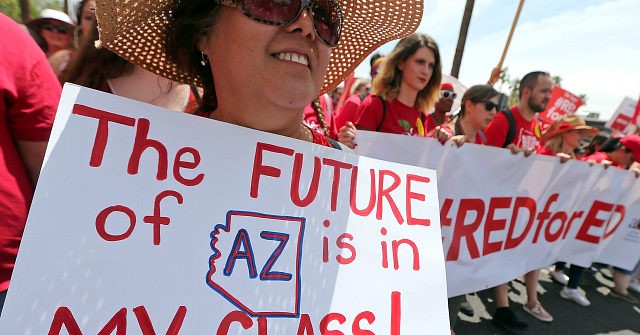 They’re “red,” all right–and they didn’t expect to lose

Far Left teachers, calling themselves #RedforEd, teamed up with “gay” groups to try to impose a new sex education doctrine in Arizona public schools, doing away with language pertaining to “abnormal, deviant or unusual sex practices”–because of course to these characters, the only thing abnormal, deviant, or unusual is a marriage between a man and a woman. They proposed to replace all vestiges of traditional sexual morality with value-neutral “scientific” sex education.

Always beware of anything that any liberal tries to sell you as “scientific.” And remember that “value-neutral” always mean that Far Left values win and yours lose.

Arizona parents got together, forming “#PurpleforParents” as a group to fight the proposed changes. They won the election and forced the state school board to abandon the radical teachers’ project.

For which we give God thanks!

True, they’ll have to fight the battle over and over again because Far Left Crazy never gives us. Never seems to run out of George Soros’ money, either. Leftism arises from Original Sin, so it will be with us until Christ returns and does away with death and sin and pitches the Adversary head-first into the lake of fire, never to be seen or heard from again. Let us enjoy the victories God gives us, in anticipation of total victory by Jesus Christ.

2 comments on “Good News from Arizona: the Good Guys Win”