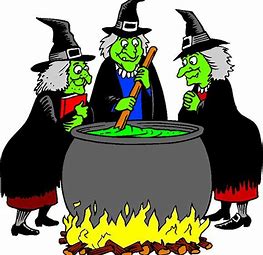 Wow! We’ve got Elizabeth “Pocahontas” Warren huddling with Hillary “Crooked” Clinton–over what, that’s a secret: but it’s gotta have something to do with the Democrat presidential nomination (https://www.breitbart.com/politics/2019/09/08/report-hillary-clinton-speaking-to-elizabeth-warren-behind-the-scenes/#)

Shakespeare’s Macbeth encountered three witches who told him he’d be king of Scotland. If the Dems want to play this scene, they still need one more witch. Who should it be? Which witch (no crepuscularity intended!) holds the final ingredient to poison America with a Democrat presidency?

Maybe I ought to set up a pool. Who’s the third witch? Ocasio-Cortez? Rosie O’Donnell? Or a real witch somewhere, who shall remain incognito as she fashions the Donald Trump dolls out of wax and sticks them full of pins, then pitches them into the boiling cauldron…

But what are they saying to each other, in these secret meetings–the phony Indian and the most corrupt woman in the Northern Hemisphere?

At stake in the next convention, in 2020, are the party’s “superdelegates”–party hacks and apparatchiks–many of whom are still controlled by Clinton.

“Yo, Liz! You’re gonna need an attorney general, know what I mean…”

Who’s going to lead the parade of kooks?