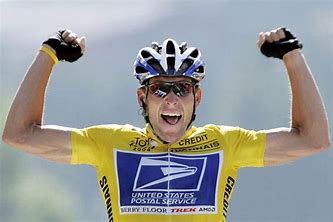 It’s worse when you wear a silly helmet and a shirt with sponsors on it.

Lance Armstrong–remember him? Worldwide celebrity, dating Sheryl Crow (until she came out against toilet paper)–and he threw it all away by getting caught cheating.

So he sought absolution. From another celebrity.

Gee. Back around the turn of the 19th century there was a now-famous short story by Robert W. Chambers, “The Repairer of Reputations.” Evidently that’s not Oprah Winfrey, who heard Lance Armstrong’s confession but couldn’t make him famous again.

And now I’m thinking of Humpty-Dumpty…

I have lived in Metuchen, NJ, all my life. I have been married to my wife Patricia since 1977. I am a former newspaper editor and reporter. I was also the owner-operator of my own small business for several years. I wrote various novels and short stories published during 1980s and 1990s. I am a long-time student of judo and Japanese swordsmanship (kenjutsu). I also play chess, basketball, and military and sports simulations. END_OF_DOCUMENT_TOKEN_TO_BE_REPLACED
This entry was posted on Monday, October 14th, 2019 at 8:42 am and tagged with culture rot, Lance Armstrong, Oprah Winfrey, seeking absolution--from a celebrity, Sheryl Crow, too much celebrity and posted in history, Pop Culture. You can follow any responses to this entry through the RSS 2.0 feed.
« ‘Jesus Calls Us O’er the Tumult’
So Who Says There’s No Free Lunch? »