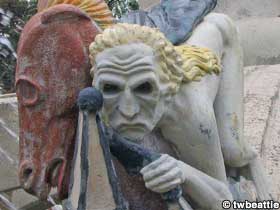 Within walking distance of my home is Roosevelt Park, a county park established during the Great Depression, home to one of the weirdest sculptures that you’ll ever see.

“Light Dispelling Darkness” was sculpted in 1937 as a WPA project of government-financed art: there’s a reason why so much of America’s painting and sculpture from that era looks like it was made in the Soviet Union. It’s a fountain with a globe on top–which I used to call “the ant world” when I was a little boy. Gathered under the globe are the forces of Light–to wit, Science, Industry, and (LOL) Education. Around the edge of the fountain, fleeing from the Light–are we getting a wee bit Zoroastrian here?–are the Forces of Darkness: Ignorance, Poverty, Disease, War… and, of course, Capitalist Greed.

Gimme that old Worldly Wisdom, it’s good enough for me!

Yes, the sane application of science and industry has lifted millions of people, world-wide, out of poverty and misery–much to the dismay of the Far Left, we might add. As for Education–well, that isn’t worth much anymore. Not after what they’ve done to it.

“Light Dispelling Darkness” is a relic of a time when things were bad and optimists reckoned times would be good again, if only they pulled the right strings and pressed the right buttons.

But except the Lord build the house, they labor in vain that build it (Psalm 127:1).

3 comments on “Want to See Something Weird?”