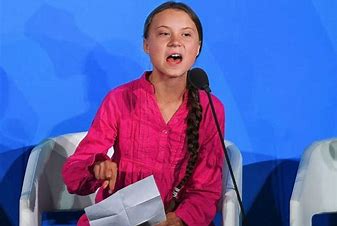 Greta Thunberg is deluded, and at some point a lot of people are going to have to answer for their part in deluding her.

Telling people to panic is nonsense. Everyone should know that. Panic is the enemy of a clear mind. When you panic, you lose control of the situation. Even if climate change is caused by mankind, and even if it can be fixed by mankind, it certainly can’t be fixed all in a minute.

If you are a Thunberg-ite, are you really willing to undergo the radical changes that she is putting forward? Are you willing to walk or bike to work, no matter how far away it is? Or maybe drive a horse-drawn carriage. Are you willing to give up your hair products, beauty products, smart phones, and computers?

If you want to visit another country, are you going to go there under wind power, taking weeks to get to a place you could have reached in a day or two by airplane? Or what if your grandmother is dying, and the only way to get to her before she passes is by airplane and there you are, galloping madly on a horse?

Greta Thunberg doesn’t know what she’s talking about, and the people who control her are abusing her by keeping her, and so many other children, in a constant state of panic, anger, and frustration.

When I was her age, my political activity was confined to making comments on news articles expressing my views. Greta is still a child. She’s sixteen years old. She should indeed be in school, not traipsing around the world telling everyone else what to do. And her parents should be utterly ashamed of themselves for feeding her tendency to obsess over things, instead of trying to help her. Add to that the fact that, as a teenager, she is in the middle of a whirlwind of hormones, and it is no wonder that she is so miserable and hopeless.

Clearly this poor girl has never been told about the true hope found in Christ. In her despair and anger we see a perfect picture of what is is like to be raised with zero religious foundation. Mankind is the be-all and end-all. We live and die by our own power. Our world rises or falls because of us. What if someone took her aside and said, “Greta, let me tell you about God”? If handled correctly, can you imagine the feeling she would get as she realized, for the first time in her life, that there is hope? That even if the world is falling to pieces, there is a rock to cling to?

I’d love to see that happen. Greta Thunberg, and all children like her, who grow up in a world devoid of God, have been robbed and deluded. They are so deluded that they are in a state of panic, and they are trying to panic everyone else over many issues which they do not understand, and of which they cannot see the consequences of implementing: gun control, climate change policies, economic policies.

I hope and pray that they will be shown the light of truth, because walking in the dark is frightening. Jesus says to allow the little children to come to Him, but there are people forbidding them to come to Him, to taste the sweetness of love and joy and freedom from fear.

Pray for intervention by the Holy Spirit–and the sooner, the better.   –LD