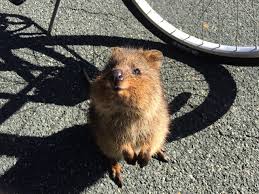 G’day, earthlings! Byron the Quokka here, with another one of those nice bicycles that somebody obviously doesn’t want or they wouldn’t’ve left it just standing here. It’d make a dandy prize for a comment contest winner!

We’re shooting for 60,000 comments, and as of now, we’ve got 58,421, which leaves 1,579 to go. We’re also waiting for Bell Mountain No. 12, His Mercy Endureth Forever, to be published, which really should be any day now. Lee wants to hand out an autographed copy to the winner. I still say the prize should be a bicycle.

Meanwhile, here on Rottnest Island, we’re working hard to make Quokka University a reality. We weren’t going to have any courses at our college, but there are a lot of us who want to study Violet Crepuscular’s epic romance, Oy, Rodney. (I say “Fap!” to that.) But the main thing we’re into just now is trying to choose a mascot. A lot of animals don’t want to be mascots of a college run by other animals–makes ’em feel, I don’t know: put-upon, I guess. I’d like it to be a centaur–half-horse, half-quokka.

We’re open to suggestions, if anybody wants to make any.

I have lived in Metuchen, NJ, all my life. I have been married to my wife Patricia since 1977. I am a former newspaper editor and reporter. I was also the owner-operator of my own small business for several years. I wrote various novels and short stories published during 1980s and 1990s. I am a long-time student of judo and Japanese swordsmanship (kenjutsu). I also play chess, basketball, and military and sports simulations. END_OF_DOCUMENT_TOKEN_TO_BE_REPLACED
This entry was posted on Wednesday, April 8th, 2020 at 3:03 pm and tagged with "Fap!", Byron the Quokka, comment contest, His Mercy Endureth Forever, Oy Rodney, Quokka University, rottnest island and posted in Just for Fun. You can follow any responses to this entry through the RSS 2.0 feed.
« The Dems’ ‘Vote by Mail’ Scheme
The Further Adventures of Jimmy the Turkey »

14 responses to “Keep Those Comments Coming!”