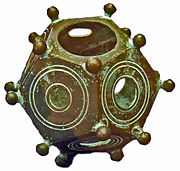 I’ve been reading about ancient Rome all my life, and not until this morning had I ever heard of a “Roman dodecahedron.”

Hundreds of these little artifacts, all of very much the same design, have been found all over northwestern Europe, in countries that used to be provinces of the Roman Empire. Oddly enough, none have been found in Italy. They are often found in caches with Roman coins, leading archaeologists to believe the dodecahedrons must have been valuable.

But no one knows what they were, what they were used for, how they might have been valuable. Theories are all over the place. But we have yet to find a single reference to these doohickeys in any Roman literature. They must have been a part of daily life that people took for granted.

Were they toys? Measuring tools? Game pieces? Lucky charms? No one knows. These things are made of metal, usually brass but always metal, and they’re durable: clean ’em up after 1,500 years in the ground, and they look as good as new.

What do you think these might have been? I’m stumped.

9 comments on “A Roman Mystery”