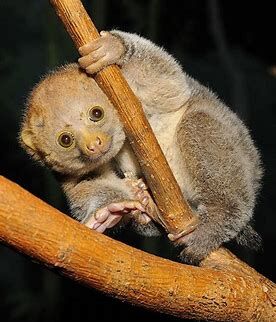 Pottos all over the world are enraged about there being even any question about allowing them to enroll in Quokka University. Throwing bricks, setting fires, letting crocodiles loose from zoos–Mostly Peaceful Pottos (MPPs) are tearing the world apart.

The Mostly Peaceful Pottos say they won’t stop until they get everything they want. Humans are warned not to travel alone in the treetops. If you must creep from tree to tree, clinging to and swinging from the branches, try to do it during the day when most pottos are asleep.

A spokesquokka for Quokka University, Emma the Quokka, said she and her fellow board members were “terribly disappointed that this sort of controversy should occur before we open our very first semester. Nobody said we wouldn’t admit pottos! Honestly, the subject never came up–until now.”

Any decision, she added, will be deferred until after the quokkas hold their annual Fli-Back Paddle Ball Tournament.

10 comments on “Pottos on the Rampage!”