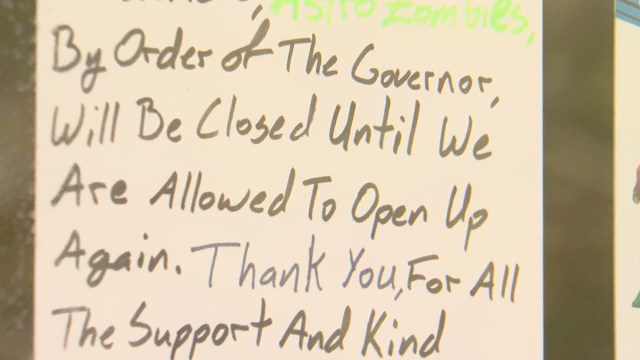 Are you getting as tired of these signs as I am? “By order of the governor.” You’re only supposed to see that after your country gets conquered by a foreign enemy.

Or a domestic enemy.

I am hampered by an inability to understand or relate to an unquenchable lust for power over other people–the dominant characteristic of all leftids. Especially when they already have lots and lots of power! As for grinding us down to take our wealth–well, how much wealthier does John Kerry or Bill Gates need to be? They’re already wealthy! You can only spend so much of it before you die.

Yeahbut, yeahbut! COVID-19, man! They can’t let us live like human beings because King Virus is gonna kill everybody dead–except, of course, if you’re out there to riot. As long as you’re setting fire to cars, looting stores, and beating people up because Black Lives Matter, the Doomsday Virus will pass right over you. (See? Toldja! Leftism must always parody a real religion. Here we have the virus sparing or “passing over” rioters–a parody of the Jewish Passover.)

On Nov. 3, Election Day, we have a chance to put a stop to this. Smash the Democrat Party in the election–not just beat ’em: smash ’em, put ’em out of ;business–and we have a chance to rediscover what government by normal people looks like. Put the fear into all politicians who think we exist for them to feed on. Because it’s not healthy, for government to hold the people in contempt! As Thomas Jefferson said, when the government fears the people, you have liberty; but when the people fear the government, you have tyranny.

They’ve used fear of the virus to scare us into submission.

But it’s getting old fast.

Time to put the fear back where it belongs–in the breasts of politicians.

9 comments on “‘By Order of the Governor’”