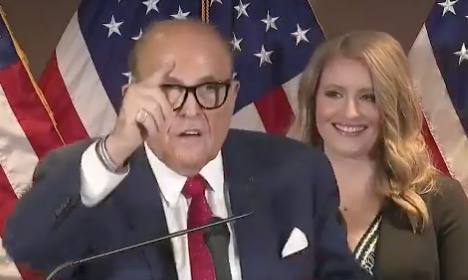 In a nutshell: the schiff has hit the fan, and we’re going to win.

What we have here is not only the theft of America’s 2020 presidential election, but foreign tampering in elections all over the globe. It reminded me of the Cuban Missile Crisis. It is a pivotal moment in history. It is also the most massive and the most audacious crime ever committed.

Without the fraud, and I do mean massive fraud, President Donald Trump won re-election by a landslide. An almost unimaginable fraud had to be perpetrated to create the illusion that Biden and the Democrats had won.

And our Free & Independent Nooze Media were willing partners in the crime–a crime against America itself, and every citizen of these United States.

Why were America’s votes being counted in foreign countries (Germany and Spain), on voting machines noted for their corrupt software and owned by Venezuelan dictators? Does that look innocent to you?

To say nothing of, for instance, a dump of 186,000 ballots after the polls were closed–every single one of which had been made out for Biden. That, said lawyer Sidney Powell, “was like flipping a coin and having it come up heads 186,000 times in a row. It was impossible.”

But that’s only scratching the surface. The president’s legal team has collected overwhelming evidence of astonishingly widespread fraud. Try to watch the video yourselves: there’s too much here for me to cover in a blog post. The scale of this crime will appall you.

This travesty of an election will be overturned.