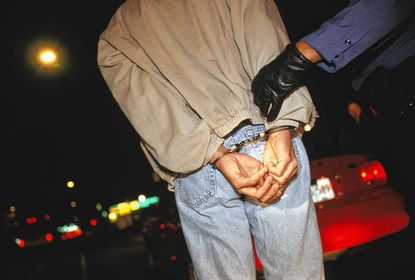 [Hat tip to my wife for the original idea]

You may have thought no idea was too idiotic for TV today. The suits at Fonebone Studios thought so, too.

It was a guaranteed winning idea, a sure hit. “Just think of it as Father Brown meets Kojack!” gushed executive producer Shemp Cafone. “We checked with our lawyers, Fowler & Fowler, and they couldn’t think of any snag that might hold us back. All we gotta do is cast it!”

Tentatively titled I Confess, Already!, the show centers on a Catholic Priest, Father Farfel… who is also Lt. Farley Farfel, homicide detective! “First he hears their confession, and then he busts ’em!” exclaimed Mr. Cafone. “You see the bad guy comin’ outta the confession thingy in handcuffs! Lt. Farfel bags another one!”

Several writers had to be fired before they could find some who’d consent to write the scripts. Said one fired screenwriter, who asked his name to be withheld, “What are they, crazy? No priest would do that! You can’t arrest someone after hearing his confession! You can’t even tell anybody else what he confessed to. Holy cow, you don’t even have to be Catholic to know that! Those guys at Fonebone are total idiots.”

Two scripts had already been written, and negotiations under way with Arnold Schwarzenegger to play Father Farfel, when the studio president’s 8-year-old granddaughter pointed out that of course not, you can’t hear someone’s confession and then arrest him. His cousin the bishop affirmed that. Without further ado, the project was killed. So was Shemp Cafone.

And it never saw the light of day…